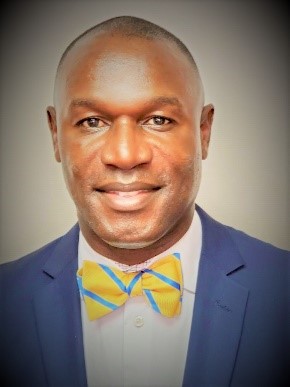 The Arizona Alliance is honored to congratulate  Andre’ Ponder in his new position as Superintendent of Red Mesa USD #27. Mr. Ponder is an  Executive Board member of the Arizona Alliance of Black School Educators (AzABSE), and we are proud to introduce him as one of Arizona’s newest Superintendents, effective July 1, 2020.  Please see the below to learn more about Mr. Ponder, a transformational leader.

Andre was born and raised in Fort Lauderdale, Florida. He graduated from South Plantation High School, and attended Broward Community College prior to receiving a Bachelor of Information Technology Degree from American Intercontinental University, a Master of Arts in Educational Leadership from Lynn University and a Master of Human Resources from University of  Phoenix. Andre completed the requirements for a Florida School Leadership/School Principal Certificate – Principal Rapid Orientation and Preparation in Educational Leadership (PROPEL) at Florida Atlantic University.

Andre started teaching in 2006 at Arthur Ashe Middle School in Fort Lauderdale. During this time, he also served as a Behavior Specialist and taught Computer Applications and Peer Counseling, while completing his Reading Endorsement Certification.

Andre joined the administrative ranks at Forest Glen Middle School in 2010. He served as Assistant Principal for grades 6 thru 12 prior to being promoted to Intern Principal and Deputy School Principal for Abu Dhabi Department of Education and Knowledge. He has served his country as a Sergeant in United States Army and Florida Army National Guard. Certified by the Broward County Sheriff’s Office, he worked as a Law Enforcement Officer and a Drill Instructor in the Boot Camp Program for youthful offenders, as well as a Compliance and Accreditation Officer.

Andre was selected as a finalist for Broward County School Board Caliber Award Assistant Principal of the Year 2016 and nomination for the Broward Foundation Distinguished Hall of Fame Award, he was recognized by the Broward Sheriff’s Office as Distinguished Honor graduate of the Military Training Academy.

He was honored to have served two years as the only Western Male Principal for Abu Dhabi Department of Education and Knowledge in the United Arab Emirates. Andre returned to the United States to further his education as a PhD student, in Arizona and has served as the School Principal for Red Mesa Unified School District #27.   Most recently, Andre is now the new Superintendent for the Red Mesa Unified School District #27, in Teec Nos Pos, AZ and is an Executive Board member of Arizona Alliance of Black School Educators (AzABSE).

Andre strongly believes that the essential keys to his life is to provide service to others. “The servant-leader is servant first…it begins with the natural feeling that one wants to serve, to serve first” (Greenleaf, 1977).